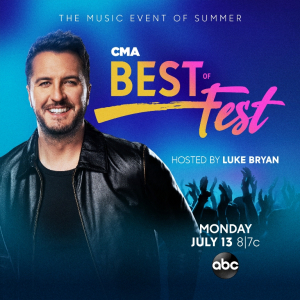 Luke Bryan will host “CMA: Best Of Fest,” Monday July 13 on ABC TV.  When Luke co-hosted Country Countdown USA, he told Lon Helton how he got the chance to host the show: “Producer Robert Deaton called me and said, ‘Luke I know you’re in quarantine, but would you want to host CMA Best Of Fest, where we showcase great performances throughout the history of CMA Music Fest,’ and I said, ‘Robert, I’d love to.’  We’re all having to make the best of these times, and I was glad to be able to put on a show. Hopefully the fans will enjoy it. Obviously it’s stuff they’ve seen before, but I think it’ll be a pretty meaningful show.

There’s a special moment at the end of the show featuring Luke and his band: “The producer told ‘I have a cool idea of putting you and your band on the field of Nissan Stadium to an empty stadium. If you want to bring a special guest in,’ and I called Jason Aldean, but he didn’t answer his phone. But Darius Rucker & I saw each other at the golf course, so I asked if he wanted to do John Mellencamp’s Small Town, and he goes ‘Heck yeah!’ So we stayed apart from each other, my band was spread out on the field, and I’ve seen the mockups of the performance and they did a great job.”

Lon asked Luke what it was like to perform that song in an empty stadium:  “With me, it was very emotional. That stadium is supposed to be filled with country music fans.  Nashville is supposed to be vibrant. People are supposed to be walking the sidewalks, going in bars, and none of that is happening.  No fans are in town. It was pretty emotional to be standing on the field by myself, when I know so many people would want to be there.”