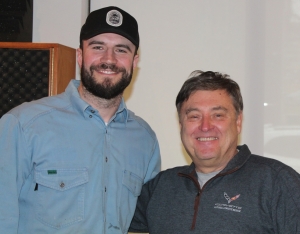 This week’s co-host is Sam Hunt. Lon began the show asking him where he spent the quarantine: “The first two months we spent in a little cabin south of town, we were quarantined there for the better [art of the spring. Things started opening up lately, so we’ve been venturing out slowly but surely.”

What about this cabin?  How big is it? “It’s modeled like an old log cabin. All four rooms are the same size. Living space and kitchen downstairs, and two bedrooms upstairs. If I have a song idea late at night, I have to go outside so I don’t wake anybody up. We just moved out to this little cabin, so we’ve had time to put some roots down.”

Sam’s Southside Tour was supposed to begin in May. He says he has missed getting to play shows: “Last year we didn’t tour much at all, I got plenty of home time last year. I was chomping at the bit to get out this year. When we found out we weren’t going to be able to tour, I was pretty bummed.”

Sam’s wife Hannah is a nurse: “She was working for about a year at a hospital in town. She stopped doing that a month before the COVID hit. So it got crazy there after she left. She called them and said she’d help out of things got bad, but it never got that bad.  She had other things she wanted to get into.  She’s helping some battered women getting back on their feet. She’s a compassionate person.”

So now that the tour is canceled, what are you doing this summer? “I think I’m going to make up for lost time with music. I’m going to see if I can get another record out next year.  So I’ll rerun last year this year, and maybe we can do the tour next year.”