This week, we’re three-way social distancing, as Lon and his co-hosts LoCash are in three different places. Lon is in our Nashville studio, Chris Lucas in in Tampa Florida, and Preston Brust is 30 miles from Nashville. “I haven’t been home this much in 20 years, but it’s so much fun to see our kids grow up. It’s bittersweet, because we love being home, but we also love being on the road.”

What’s the toughest part? “Not working, because we are workaholics. I can’t keep still. I haven’t seen Preston in 3 months. We facetime and talk 3 times a day. At first it was a nice reset and break. But everything we do every day has gone away. I miss that, I miss the fans, I miss Chris too. At first I was like, ‘Thank God I don’t have to see him,’ but within a few days, we miss each other a lot.”

Last year, the guys were on tour with Chris Young, and they learned this about him: “He’s the champ of all champs of Golden Tee. We went at a show in Florida, and he says, ‘Let’s get wings & beer and watch football.’ We went out and I noticed Chris was gone. He found a Golden Tee, and he has a platinum card and plays a full game in ten minutes. He is amazing. We were all cheering for him. It was so cool.” 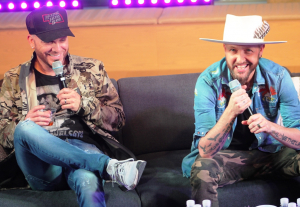 The LoCash guys are champion cornhole players, and they told Lon about a game they played with Kane Brown: “Chris & I are undefeated, and I didn’t think anyone could beat us. Then Kane & his partner started beating us. So it went from $100 to double or nothing. We lost again. Then it went to $400, and we lost again. So we decided to go one more round, double or nothing, and we won 21 to 20. So we got lucky.”

The current LoCash hit “One Big Country Song” was co-produced by Tyler Hubbard of Florida Georgia Line. You can even hear Tyler in the song: “In the chorus, that’s all of us in there singing together. That was just fun, what if we all get in there and sing it together. It’s like in the sing-along, and you hear a bunch of people singing, that’s all of us.”

Chris & Preston of LoCash talk to each other several times a day. When they aren’t speaking with each other, they might be speaking with their friend Chris Janson: “The other day he called my five times. He said ‘I need you to listen to two songs right now.’ We picked his next single after Done. But he bounces back and forth on our phone lines.”

One of the writers of One Big Country Song is Hardy, who has a song in the Top 30. Preston told Lon, “He’s got this song that’s one of my favorite songs. It’s called ‘Hope You Like Pancakes.’ The first time I met Hardy, I told him he wrote one of my favorite songs. So hopefully some day we’ll cut that song.” What would get it done? “A big sponsorship! I would love me some pancakes!”