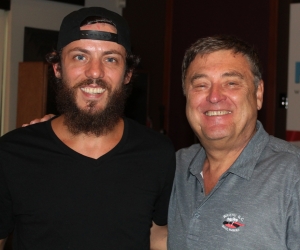 This week, Lon’s co-host is Chris Janson, who is quarantined at his beach house in Florida.  “We’ve been here for 4-1/2 months.  We were taking our spring break. So we figured we were here, so we might as well ride it out.  That’s what we’ve been doing.  It’s a great time to catch up.”

If you want to know what the Janson’s beach house looks like, just watch the video for his song “Done.” Chris explains: “Yes I’m looking at the same porch.  The ‘Done’ video was just going to be a marketing piece.  But then we got it back and liked the way it looked.  Then it blew up, and the song blew up, so we left it as the video.  You can’t replicate real.  That’s just us doing what we normally do, and it worked.”

While Chris has been staying in Florida, he’s discovered a few new friends who live nearby:  “Being in Florida, Brian from FGL spends a lot of time here.  So I reached out to him, and heard back, so we’ve been talking about writing and see what happens.”

Last fall, Chris went duck hunting with Luke Bryan: “I had never been duck hunting before, and I met him at the airport at 3 AM.  He called me on the road, and invited me to go duck hunting.  I got home, went to the house, packed my stuff, and went back to the airport at 3AM.  We cooked, had a great time, it was very special.”

Chris is friends with the two LoCash guys, and they talk on the phone every day.  But now they are back to back in the chart.  Lon asked Chris if there’s some trash-talking: “Oh 100%, but in a good way.  Especially me and Preston.  The great part is we’re competitive, but we also want to see each other win.”  Is there wagering going on? “That’s actually a great idea.  We may start now.”

Chris & his wife Kelly recently celebrated their 10th wedding anniversary.  Lon asked how they spent their day: “We took the family out kayaking.  My daughter suggested that we do it, so we decided that’s what we’d do for our anniversary.  Some celebrate in different ways. We celebrated by hanging out with our kids, it was fantastic.”