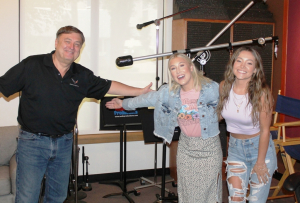 This week, as you can see, Lon is socially distanced from his co-hosts Maddie & Tae.  They are each newlyweds, and they’ve spent the past few months with their respective husbands.  But they’ve survived: “It’s been really good! Everyone probably wants to smack us for saying that, but we’ve enjoyed being newlyweds in this quarantine. Now we get to be wives, and that role is important to both of us.”

Maddie married her high school sweetheart in November, and Tae married a Nashville songwriter in February. Maddie told Lon, “I had to tell my husband, ‘Honey when I’m in the bathtub, don’t talk through the door. I want to be by myself.’ Tae said, ‘It took us a while to get on the same page too.  It took us a month to find out his routine, that he wakes up 5 hours before me, and I wake up and meditate.'”

Last year, Maddie & Tae were on Carrie Underwood’s tour.  “We knew it would be unlike any show we had been a part of.  I was so nervous.  We didn’t realize how much we were going to learn from that tour.  That experience we will take for the rest of our career. Also we never fell off the stage. Or there’s a video where I almost fell, and Carrie caught me.”

When Carrie was Lon’s co-host, she said her son Isaiah loved Maddie.  Maddie said, “Carrie invited us to Isaiah’s 5th birthday party in February. We had the best time. During the cake part, we sat close by, and this boy asks Isaiah, ‘Is that your baby sitter?’ And he goes, ‘No that’s my girl friend.’  He also met my husband, and I could tell, he was like, ‘Wait a minute. You’re gonna be married?’  But Carrie sent me a video of Isaiah singing ‘Die From a Broken Heart.'”

For the past year, Jason Aldean has been a neighbor of Tae.  She told Lon, “They were our neighbors for just a few months, because they were building their new home. So it was their in-between home.  But it was so cool, I got to meet Memphis, he was out with Jason’s dad, and they’re a really nice family.”

With their tour canceled, Maddie & Tae have some free time.  Lon asked what they’re doing: “We’re writing up a storm. Some fun projects. There’s a surprise coming later this year. But I feel like we’re doing fun things.  I’m taking care of my chickens.”  Tae added, “I play Call Of Duty with my husband. I have a pink controller.”  “You’re a way cooler wife than me.”