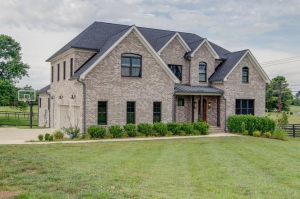 This week, Kane Brown told Country Countdown USA’s Lon Helton that he’s spent the past few months doing some improvement projects on his new house. “We just had a pool installed, we had turf installed, a new driveway, and we’re about to put in a basketball court.”

But in the meantime, his previous house, the one he rented to Jason Aldean, is now “under contract.” “Yeah we just got an offer, so hopefully it closes. We had an offer on it before and it fell through.  So hopefully this one actually works.”

Was Jason a good tenant? “He was. He actually fixed it. When we moved in, the movers scratched some walls, and my dog chewed up my step at some point, so all that’s fixed now. So for me not making him pay rent, he just fixed everything. It’s ready for people to move in when he got out.”

Kane moved out of the house about a year ago.  He let Jason and his family live there while they were building their new house.  Kane has been to Jason’s new house: “He basically moved into The Palms. It’s super-nice.  It’s amazing.”

Back to Kane’s new house, he told Lon that Jon Pardi is a regular visitor: “He’s at my house almost every day.  He’ll come over and swim or hang by the fire.”

Kane has a number of home improvement projects in the works: “For me, I’m in my perfect house. It’s like a cabin. When I put my basketball court in, I’ll probably never leave.”

Who would you invite to play basketball? “Jon Pardi has already said he’ll be there.  I told him he could be my center.  Jimmie Allen would play, Chris Lane and his brother will play.  I’m gonna be in there every night, shooting and getting better, so when they come over, it won’t even be fair.”