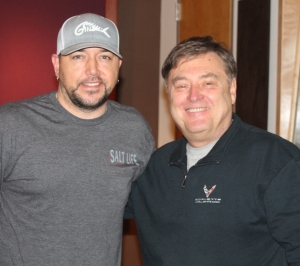 This week’s co-host is Jason Aldean, who is socially distanced in our studio.  Lon asked where Jason was when the virus hit, and he says he was on tour: “We were in Wisconsin, had 3 shows left, and I got a phone call from my manager, and we had to cancel 3 shows.  From there, we went down to Florida, we have a place down there, took the kids there, stayed for 3 months, and tried to make the best of the quarantine.”

Once the summer tour was canceled, Jason had a rare summer off: “It’s been over 15 years since I had a summer off.  I don’t think I would do that on my own. So it’s been nice to spend more time with my kids. My oldest daughter is a senior in high school, so I could spend time with her before she goes to college.”

Earlier this year, Jason was living in a house owned by Kane Brown.  Jason explained it to Lon: “He had this house that was empty, and it was closer to my family, so I asked if I could rent his house.  He wouldn’t let me pay him rent.  But there were things that needed to be fixed.  So I fixed everything so now it’s ready to sell.”  In fact, it was just reported that Kane has sold that house.

Jason moved into his new house in June, and Lon asked if they’re all settled yet: “It’s been great, but we’re still unpacking and working on things.  There were landscapers there today.  For a couple years, we lived in rental houses, and a lot of our stuff was in storage.  It’s great to get all that back. I’ve got some clothes I haven’t seen in a while, so I feel like I’ve got a new wardrobe.”

Kane Brown has been a guest at Jason’s new house, where he has played Jason’s golf simulator.  “Kane came over, never played golf before, we started playing golf, and he hit a ball, shanked it, and hit hit the cart path, and rolled for a long way, and it said he hit it 310 feet.  So does he have the longest drive?  Yes, but that’s because it hit the cart path 12 times.”

The video for Jason’s current hit, “Got What I Got” showcases his two youngest children, Memphis and Navy: “Memphis is wild, he’s hyper, full of energy, and he’s very emotional. Navy is the tougher one.  She’s very loving, walk in the room, and just smile for no reason. Memphis is more high strung than Navy.”

Jason says he’s picked up a new hobby: “I probably learned to cook, because I’ve been home so much.  When we were in Florida, the restaurants were closed, so we just figured it out.  I’m a seafood guy, and I’d get oysters and cook them on the grill.”