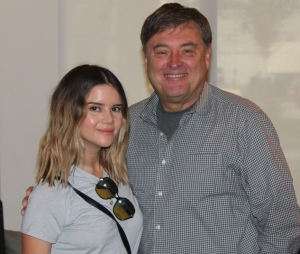 This week’s co-host is the newly crowned ACM Female Vocalist of the Year Maren Morris.  She co-hosted the countdown from her kitchen! her 6 month old baby boy was sleeping a few feet away. “It’s been so nice having this downtime. I have liked being home for the first time in five years.”

The home time has given Maren the chance to be with her baby Hayes.  Lon asked her what has been the biggest revelation about motherhood: “How easy it has been and how difficult it has been. The easy part is that we’ve been given this calm, low key child. He’s so go-with-the-flow. It’s been nice to see his personality flourish. People tell me I have a very chill kid.”

Maren told Lon that she received some great baby gifts: “Miranda Lambert sent me & Hayes matching denim bedazzled jackets with our names on the back. The girls from Little Big Town sent him a sweet bunny gift, and Carrie Underwood sent him this blanket with his name embroidered on it.”

Maren described her experience the night of her ACM win: “It was a different set-up than we’re used tp. They told me I’d won something, but they didn’t tell me what. I obviously was in shock, I didn’t know I was getting that award. It still felt like a magical night. It took me a second to realize the last three women who won that award were from Texas.”

There were no big post-awards parties that night, but afterwards, Maren had a party with her band:: “I just had my band come over to my back porch after the awards. We did a Vegas theme décor on my porch. We got to celebrate the one time we can this year.”

Moments after Maren won Female Vocalist, she ran into Thomas Rhett backstage at the Opry House. She told Lon what happened next: “I was in the press room after I’d won. And one of the reporters said ‘Carrie just won Entertainer.’ I walked out of the press room, and saw Thomas Rhett, and I didn’t realize they had tied.  So I didn’t know Thomas had also won, and I didn’t congratulate him. I found out in the car, and I felt like such a loser.  I need to reach out and explain myself.  I’m such an idiot!”