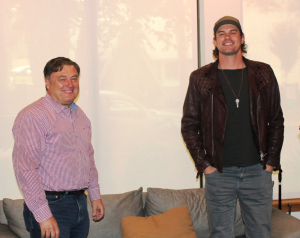 Lon’s co-host this week is newcomer Matt Stell. As you can see, they’re socially distanced in the studio. This is also Matt’s first time as Lon’s co-host.  He topped the chart almost exactly a year ago with “Prayed For You,” and is in the Top 5 now with “Everywhere But On.”

Lon asked Matt how he’s been filling the time these past few months: “I spent the early days at home as much as possible.  I live by myself here in Nashville, so I’m not near any at-risk people. The last show we played was in New York City, and then we shut down, and I stayed home. I’ve written a lot of songs, and played a lot of golf. I’ve somehow gotten worse at golf.”

Speaking of golf, one of Matt’s golf buddies is labelmate Jameson Rodgers: “Jay-mo is my buddy.  My only complaint is any time we play golf against each other, he takes my money, and when we’re on the same team, we lose money. I’ve been playing awful golf. He’s a good player. He plays like he lives life. He’s steady and he does it the right way.” 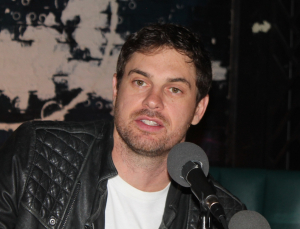 Matt was supposed to be part of the Rascal Flatts Farewell Tour.  “We were looking forward to being on that tour. I met Jay DeMarcus through Todd Chrisley.  I think I may have recorded once at Jay’s home studio. Great guy, incredible family, those guys have been putting out incredible music for 20 years. We hope we’ll have a chance to do it again in the future.”

Last year, Matt was on the road with Chris Young: “For the record, Chris Young is the best Golden Tee player I’ve ever seen. It was not even close.  He will administer the butt-kickings on the road or at the house, in a box with a fox, it don’t matter.”

One of Matt’s favorite concerts last year was the Eric Church show at Nashville’s Nissan Stadium: “It was epic, it was a very special night to watch. I’m so glad I got to do that. He’s on my short list of people who make music.  I can’t say enough of how much of a fan I am of his music and his art.  Watching that show and watching that band lock in is one thing as a music fan that I love.”