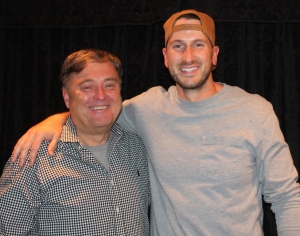 This week’s co-host is Russell Dickerson, and much of the conversation revolved around his 6-week-old son Remington.  He told Lon: “He is over 16 pounds already. He’s crushin’ life.” Lon asked if he’s sleeping through the night? “Not yet. I’m up at 1 AM, 3AM, 5AM, but hey! That’s dad life. When he wakes up in the morning and recognizes you and smiles, there’s no better feeling.”

Of course a name like Remington is pretty big for a 6-week old.  So what do they call him? “Remie, Rem-dog, Rem-dog millionaire.  I feel like Remington will be when he’s done something wrong.  But Remie will probably be the one we settle on.”

Of course Russell joins a bunch of new parents in country music, including Thomas Rhett.  Russell says it’s been tough getting together: “It’s time to get back in the saddle, time to get back to working out. I just talked to him on the phone a few days ago.  Good to catch up.  I think they were headed to the beach.”

Russell has known FGL’s Tyler Hubbard since college, and Tyler also became a new dad a few weeks after Russell. “We just went over to Tyler’s house to meet Atlas who was born two weeks after us. They were due a week apart. We were hoping they would come the same week. In fact they had us reserved in adjoining rooms.  But he came two weeks after.”

Russell began 2020 on the road with Kane Brown and Chris Lane: “We played five shows before the shutdown. We were all with our wives, so it was like a triple date.  Kane had his wife & baby on the road, and they gave us tips about how to change a baby diaper on the bus. The fans think it’s a big party, but we’re talking about breast feeding and poopie diapers.”

There was some guy time on that tour.  Kane told us a few weeks ago they were playing “sting pong,” and Russell said he joined in too: “It was so awesome.  It’s a great team building experience. You’re sprinting around the table, and if somebody hits you with that ball, it leaves a big old welt, and it stings for days.”