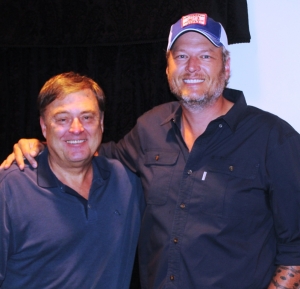 This week, Lon’s co-host is Blake Shelton from his ranch in Oklahoma.  He tells Lon, “The last time you & I spoke I was at this same desk that I have, I love having these conversations with you because I know something must be going on good in my career if Lon Helton wants to talk with me.”

Of course, we’re about three week’s into the fall season of The Voice on NBC.  Blake says those shows were previously taped: “Everything that’s airing now is shows we recorded in the summer.  Now all we have left are the live shows, and we only have three live shows this year.  We can’t have an audience in the building like we’ve had before.”

Blake pointed out that they have returned to the LA studio and the big red chairs: “It’s interesting, the Voice chairs are already distanced.  They were 6 feet apart before. Now they’re 8 feet apart.  The show has been able to move forward without skipping a beat.  You won’t feel like it’s the COVID era. The only thing you miss is the live studio audience, but we still have audience reaction through video.”

This season, Gwen Stefani has returned as a coach: “She is, which makes it more exciting for me to go to work. We ride to work together, we go home together, it’s a lot of fun. We met on that show. Now 5 years later, she’s more competitive this season than she’s been before.  She hasn’t won yet.  She says if she don’t win, she wants to be sure I don’t win either, so she doesn’t have to hear about it at home.”

Blake & Gwen have now had two hit duets.  Lon asked if Gwen might release a solo country song for country radio: “No, the only person who has a serious conversation about that with her is my mom. It’s one thing to sing on a country record with me.  It’s a totally different thing for her to shift gears and make a country album.  But she loves country music, and her kids especially love it.”

This week, Jameson Rodgers scored his first #1, so Lon called him to congratulate him.  During their conversation, they also talked about Jameson’s recent engagement. “I feel like I’m one of the few guys who’s winning 2020.  Life is pretty good for me now, I’m trying not to mess it all up.”

In addition, Luke Combs called Lon with the surprise news that he won the 2020 National Personality of the Year.