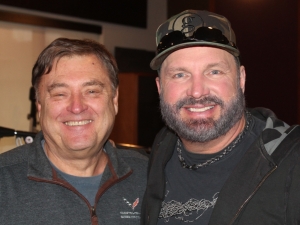 This week’s co-host is Garth Brooks, socially distanced in our studio.  Lon asked him about his own COVID scare over the summer: “One of my daughters was diagnosed, tested positive, she quarantined, it was done right, and she got through it.  Right now everything’s great.”

Garth had to cancel several stadium shows earlier this year, and he’s looking forward to getting back to the tour once it’s safe: “I’m just biding my time, but you don’t want to play with guilt.  Let’s make sure everybody’s safe, everybody’s good.  The minute they drop that green flag, you better get out of my way!”

The extra time led to a few new songs added to the project: “That delay led to the people through social media saying they wanted to hear our take on ‘Shallow’ from ‘A Star Is Born.’  There was also a duet with Charley Pride that happened as a result of the delay.” 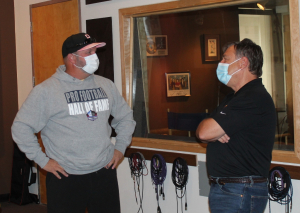 Lon also asked Garth about a special event that happened before the shutdown in March: The Gershwin Prize for Popular Song. “It was at the Library of Congress in Washington DC.  Right before the show, they presented us gifts.  My gift was the original lyrics to two songs my mom wrote, and the application for my first song.  So I have my mom’s handwriting and my handwriting together.”

Garth had a hit earlier this year with Blake Shelton, so Lon asked about Blake’s recent engagement to Gwen Stefani: “He came out to Boise last year, and he asked ‘Where’s my dressing room,’ and I said ‘You’ll find it.’  And it said ‘Mr. Stefani’ everywhere you go.  But I was really happy for them, and what I respect is they took their time.  When you’re with Mrs. Right, the whole ceremony is for the other people.  It’s not for you & her.  You already know.”

Finally, holiday plans? “When you have Trisha Yearwood in your household, eating will be fantastic.  Here’s the Thanksgiving that I told her we should have this year.  We should be prepared like always for the 20-30 people who’re in our house at Thanksgiving, and just don’t invite anyone: The pandemic!”

NEXT WEEK: CMA Entertainer of the Year Eric Church