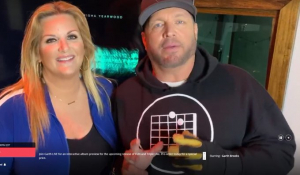 So what happened to your hand, and are you OK now? Yeah everything’s great, wearing the wedding ring is tough because the knuckle is still swollen. I’m gonna end up losing my nail, but if that’s the worst thing that happens, it’s ok. I was loading up a chop-saw and it was dark, so when I put it in the truck, it just collapsed on my hand. I was wearing gloves, but if you get them pinched off, those gloves won’t help.  I reached down with my right hand, cause I didn’t want to look, saw I had all of my fingers, and went from there.

What’s a chop saw? It’s one of those things where you do specific cutting. You normally bolt it to a table and work, but since we were outside, it was laying in the yard. I was careful, until we loaded it in the truck. It has two locks, and I didn’t lock the second one, so when I loaded it in the truck it collapsed on my hand.

Are you back playing guitar? It hurts to play, cause on the other side it’s tender as hell, but I got lucky, and hopefully I’ll get to play guitar until I can’t remember how to play.

So are you making something? We were doing deck for a friend of mine, and the next door neighbor asked if we did deck work. She’s a retired Navy intelligence.  She asked what do you charge? I said ‘Chocolate chip cookies and Dr. Pepper is what we’re charging this girl.’ So she was so sweet, made the biggest batch of chocolate chip cookies, and the coldest Dr. Pepper, so we got her deck fixed. Before we took off I smashed my left hand.  It’s COVID!  You’ve got time to do all that stuff.