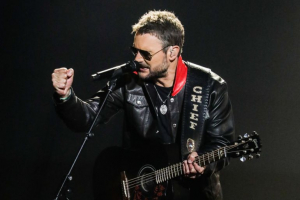 This summer, Eric Church released “Stick That In Your Country Song” as the first single from his forthcoming album.  It was a rare song that Eric did not write.  Country Countdown USA’s Lon Helton asked Eric how the song got to him and why he recorded it:

“A big part of this new record is Casey Beathard, who’ve I’ve written with a lot, he was the heartbeat through this entire album. We;d finished up, wrapped everything, and he came on my bus.  He told me a conversation he’d had with [songwriter] Jeffrey Steele.  Jeffrey played him ‘Stick That In Your Country Song,’ and Casey asked him ‘Have you played that for Eric?’  And Jeffrey goes, ‘He’ll never record this, it’s not something he’d do.’  So Casey said, ‘Send it to me.’  Jeffrey sent it to him, and Casey came on my bus and played it for me.  After I heard it I called my producer, and said we need to record this.”

So you recorded it in North Carolina with all the other new songs? “Yes it was the last thing I did.  We took over a restaurant that’s closed in the winter. They’re a summer place. So we took that over and used that place.”

What was it about that song that made you want to record it? “I loved the boldness of it. I come from a generation of country music that’s honest, uncomfortably honest. If you listen to the music now, it got a little feel-good, disposable, and I think that song called it out. It even called out some songwriters. What’s crazy is that song was written and recorded before COVID! You would think we’d made that decision post Covid. We did not.  We left there before we knew what Covid was. That song became more relevant as the world changed.  It wasn’t gonna be my first single. I didn’t know what I was gonna do with all these songs. As the world changed, that song raised its hand. I couldn’t believe how relevant it was.  And it was written many years ago.  It’s not lost relevance, it’s gained it.  It was written 5 or 6 years ago.  I loved the ‘teacher’ verse, and I thought about that line because of my kids.  The teachers are front line. We don’t want to traumatize our kids.  I think the teachers, that verse, spoke to me.

This came in the wake of George Floyd, attention please, there’s stuff in the world that’s going on: “That’s another thing, those cities in the song, Detroit or Baltimore, they were prior to their relevancy.  There are songs that are meant to be heard, and meant to have their time. I couldn’t believe this song was 7 or 8 years old.  I think it finds its path and gets where it needs to  be.

So I’ve been waiting three months to ask you about this.  I want to take you back to your performance of Stick That In Your Country Song on the ACMs.  I was told by the producer it was your vision, so take us through that vision: “As far as the vision, I had a buddy of mine sent me a video of Ralph Emery and Johnny Cash on Nashville Now. Ralph was asking Johnny about the flag. Johnny made an impassioned plea about what the flag means to him, and then says what America means is the ability to burn that flag.  It was such a powerful thing.  We’re in some stuff now, but we’ve been in stuff before.  When you think of the challenges, it was uplifting to me that you had Johnny Cash talking about the trials, but it’ll be OK. It moved me to tears. So I sent that video to my manager and said this should lead into Stick That in Your Country Song.  Initially I was gonna do Johnny’s part.  The Cash estate said it had to be Johnny’s voice.  The ACM producer said to me, ‘Why don’t you write a letter to John and Roseanne.’ So I wrote a letter, and I wrote about what it meant to me to have Johnny’s words, and I believe the world needs that now.  About a day later they came back and said ‘Go for it.’  It’s bar none my favorite awards show performance and nobody was there to see it. I think that made it interesting for me that it was in the Ryman, empty, it was a spooky environment. It had all the elements, I had goose bumps when he was behind me, and we did it two times. That’s all we needed. Everybody had goose bumps.