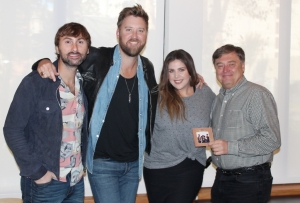 This week, Lon is off and all three members of Lady A co-host the countdown in his place.  They each co-host from their homes, and begin by saying how they spent the holidays.  Dave said, “We spent the holidays in Nashville, It was a fantastic Christmas, hanging with the kids.” Hillary added, “Same here, my little girls enjoy it, we did a lot of baking together, it was just a great holiday.” Then Charles said, “I actually spent Christmas in Florida, we had to get away from the cold weather, so we went down there for a cozy Christmas.”

Lady A did several projects this past year with Thomas Rhett: “I feel like we’ve become best buds.  We did a song together on our Ocean Deluxe album called ‘Heroes.’  We also did the CMA Country Christmas hosted by him and his wife. Hillary got to be a part of his song Be A Light. Such an incredible talent and incredible guy.”

Charles was part of Luke Bryan’s Crash My Playa festival earlier this year: “We’d all been drinking tequila, me, Luke, and Jason Aldean, all day before the performance.  Then we went and did the show, so we had a blast, I also brought Luke’s mom on stage and danced with her, so that was a great memory.”

Lon was spending time with his family, but called in during the show to talk with Lady A about the TV show “Songland” and their current hit Champagne Night: “We’re huge fans of the show too, and we think it’s important that people learn what goes in the process of writing a song. It’s neat to see how the creative process comes together.”

Charles tells the story behind how he ended up singing with Carly Pearce on the CMA Awards: “Covid hit Lee Brice. I got a call early in the morning, telling me that Carly wanted me to step in for Lee, and I asked, ‘Does Lee know?’ and it turned out he was on a plane.  So we pre-taped it the day before. It’s a really high song to sing. I told him he didn’t give me an easy job, but I was proud of it.”

Hillary gave the update on new music: “We have spent our time this year writing songs. We have a pile of 55 songs, so we’ve been busy. We’re kicking off the year going back in the studio in a few weeks.  We’ve been debuting some new songs at the Opry, so we’re trying to make the most of it.”