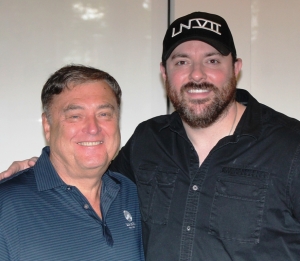 This week’s co-host is Chris Young, who told Lon how he spent the Christmas holidays: “I stayed here, stayed with my immediate family, my mom, dad, and sister. Didn’t get to do the extended family thing, but we spent the time together, so it was great.”

Lon then asked Chris about the favorite gift he gave this year: “I got really cool gift that took the most time, and my mom’s favorite movie is White Christmas, so I found one of the original movie posters, and I got it framed up and gave it to her for Christmas.”

Chris has just released a new single, and it’s a duet with his friend Kane Brown called “Famous Friends.” “I wrote this song on the road, and we came up with the idea of the people I grew up with, and all of the people in the song are people I know.”

Lon asked about the decision to bring in Kane: “I thought this would make a cool duet where two guys sing together.  Usually they’re drinking songs. This was one that was different, so I called him up and asked him to join me on it. He said, ‘Yeah I’m in!'”

So will this be on Chris’s next album? “Yes. I have an entire album that’s already done, and I spent this past year writing and recording maybe 130 songs, so I probably have an entire double album ready to go at this point.  I’m not joking.  I’ve got that done right now.”

Chris started the show staying this was the first time in 16 years he spent the entire summer at home.  So how did his dog Porter react? “Early on, when I was home all the time, he was like, ‘This is great! You never leave!’ So he followed me around the house all day. But it’s been awesome, because I live alone, and it’s nice having him around.”