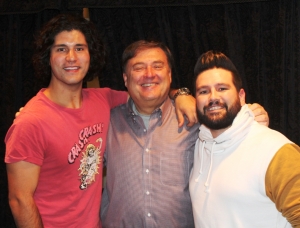 This week’s co-hosts are Dan + Shay, speaking to Lon from their respective home studios.  Shay said, “It feels good to be a new year. I think after 2020, it’s gonna be a good year period.”

Dan began by describing what he did after their tour was shut down in March: “I think the first 2-3 months, Shay & I didn’t see each other. Everybody was glued to the news.  Then we realized we had some time to fully focus on music on our own time. That’s how our single came to be.  We started it a while back, but all this extra time on our hands, with no pressure, we stumbled on some magic, and recorded it then and there.”

Shay added, “It was shocking, but we were so deep in tour planning, we didn’t know how serious it was. But for me, it was a weird time. Two weeks before our tour began, we had our youngest child, Ames. Now he’s about to turn 11 months. That’s how I’ve been able to measure the time.”

Shay said his time with his young children has been the silver lining: “We’re never going to get this much time at home again. I missed a lot of the moments with my 3-year-old. I’m there for them now. I’ve been able to be Mr. Mom, and it’s given me a new perspective on what it means to be a dad. It’s been a precious time. Nothing makes you feel like a rock star than waking up at 3AM and changing a massive poop.”

Dan & his wife don’t have kids, but they have a house full of rescue dogs: “It’s been awesome, people spending more time at home, our dogs, this is the best time in their lives, ‘Our parents never leave!’ They don’t know what’s going on, but they’re very happy.” Lon asked Dan about having kids: “We’ve got our four dogs right now, and that’s a handful. At any given moment we could have five or six dogs, we’re enjoying our lives, but the animal rescue thing is super close to our hearts.”

Dan added that animal rescue is something he has shared with Luke Combs & his wife Nicole: “We’ve been lucky enough to become friends over the years, I’ve gone to his house and hang out, met his rescue dog JoJo, who he adopted from our animal rescue Proverbs 12:10 Animal Rescue. Great people for doing that.”

The #1 song this week is the first by Parker McCollum.  As a result, Lon called him with congratulations.  However, Parker didn’t expect he’d also be speaking with Dan & Shay, because he said, “Wait, wait, wait. Is this THE Dan & Shay on this call? What? I apologize.  I saw ‘Dan & Shay’ on there and I guess Lon’s co-hosts were called Dan & Shay, what a treat, I’m such a fan of you guys.”

Parker when on to say that the day he received the news he had his first #1, he was at his ranch in Texas, on his way to the deer stand.  He received a text from his manager that it was for sure. That morning he shot his first buck with a bow on the morning his song went to #1.