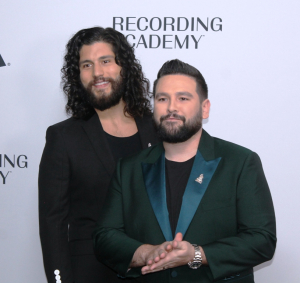 While doing the Countdown, Dan + Shay were reminded of a moment while recording “I Should Probably Go To Bed.” It’s towards the end of the song when Shay hits all the high notes.  Country Countdown USA’s Lon Helton said, “At some point, you’re going to have to sing those notes every night when you go on the road. What were you thinking?” Shay said, “We weren’t.”  Then Dan said, “There’s a video of us recording it, we ought to dig into the archives and release that at some point.  We were at my house, filmed ourselves doing the entire thing, and that was last minute. The end, we were throwing hail Mary’s out there. The end before you went home, we had several glasses of tequila to inspire this, and I was so crazy, I said Go for it, and you got it, and then I said ‘Could I trouble you to do it two more times?’ and we got it, finished the tequila, and that was that.”

A couple days later, Dan actually did dig into the archives, as he said, and found the video of him & Shay in the studio recording the end of the song, and they posted it on their Twitter: Watch it here:

Lon also talked to them about making the acoustic video of the song at Ocean Way Studio here in Nashville.  Lon noticed there was a moment at the end of the video when Shay almost lost it: “I’m staring right in Dan’s eyes, right before we started it, and I thought I’m not gonna make it through this.” Dan added “We were so close in proximity, and it’s a serious song, but we’re not serious guys, and we’re sitting there singing, so my eyes were looking down at the keys for good reason.”.

Here is that video of I Should Probably Go To Bed recorded at Ocean Way: