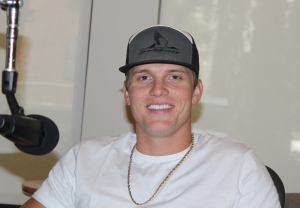 This weekend, Parker McCollum had his first #1 song with “Pretty Heart.” In keeping with our tradition, Lon & his co-hosts called Parker to congratulate him.  When they started talking, Parker realized that Lon’s co-hosts were Dan + Shay!  “Wait, wait, wait. Is this THE Dan + Shay on this call? What? I apologize.  I saw ‘Dan + Shay’ on there and I guess Lon’s co-hosts were called Dan + Shay, what a treat, I’m such a fan of you guys.”

Parker when on to say that the day he received the news he had his first #1, he was at his ranch in Texas, on his way to the deer stand.  He received a text from his manager that it was for sure. That morning he shot his first buck with a bow on the morning his song went to #1.

Listen to the call here: