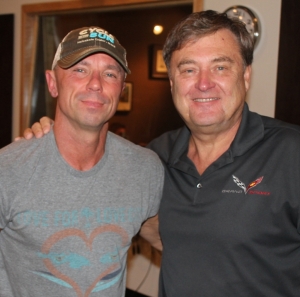 Lon’s co-host this week is Kenny Chesney from his home in California. He tells Lon, “I’m just as bored as I can be but I’m alright. I’m in ground zero of this thing. I don’t go out anyway.  I’m pretty quarantined as it is. I don’t see many people.  I have a small work-out group, and I gotta get out of the house for something.”

Lon observed the sound from Kenny’s house was pretty good: “Lon, you won’t believe where I am. Where my house is, is pretty close to the water.  It’s high tide, and you can hear the waves crashing in the house. I didn’t want to do this interview with the waves crashing. So I’m literally in my garage, in my car, with my computer doing this interview.”

Lon asked Kenny where he was when the virus first hit: “I was in rehearsal for the tour. We expected to go on the road. We were in the zone, we had done the initial rehearsals, and had to shut it all down.  It was so uncertain, nobody knew what was going on, and it’s been almost a year since then.”

Kenny had Eric Church on the road in 2013 and 2015, so he was very happy when Eric won CMA Entertainer of the Year: “I texted him right after he won, I was very happy for him.  He & I became very close on the road.  Eric understand the moment when he was out with me. All his fans love great music and great songs.  He is a solid song-first guy who happens to be great on stage.”

Morgan Wallen grew up near Kenny in East Tennessee, and the two have been in touch: “Morgan & I grew up very similar.  When you see someone who came from where you came from, it lets you know anything is possible.  If you have that fire in your gut, you can do a lot.”

So with the summer still five months away, when does Kenny thing he; will be back on the road? “I’d hate to speculate. It all depends on how quickly the country gets the vaccine out. In the next 3 or 4 months, we’ll see the temperature of the country.  I know I want to go play. I wish I could tell you because I’m ready to go.”