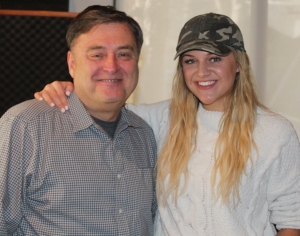 This week’s co-host is Kelsea Ballerini, who told Lon: “I’m like everyone else, I’m trying to figure out my footing this year, what to do, how to stay creative. I think last year it was hard to feel like I was doing anything right.  This year, I’m taking back ownership, feeling creative because I can.”

Among the projects accomplished at the end of the year: “I moved! From an apartment to a house! It’s not brand new, it’s a couple years old.  I was ready for a little back yard.  My dog is over being in an elevator. It’s been nice having something to put energy into, to take my mind off the fact that we’re not touring.”

Describe your design style: “I like having a lot going on. I find a lot of comfort in that, it’s cozy to me. When we bought the house, all the walls were white. I was like, ‘It’s like a blank canvas.’ I love patterns, and mixing patterns and textures. It’s another form of creativity that I really enjoy.”

So how many bedrooms in this house? “Four.  It’s more than we need.  I have a large closet, we converted a room into a home gym, and another is a studio. So the bedrooms aren’t bedrooms any more.  We don’t have kids yet, so we can still make the rooms for ourselves selfishly, before that phase of life comes.”

You said “yet,” so what does that mean? “I think if we were to have kids, it would have happened this year, because everyone else has had them, but we’re not ready yet. We want to be all-in when that phase comes, so not quite yet.”

So, besides the house, what new hobbies or projects have you picked up? “I think I’m a pretty good cook now.  I love food so much, but I couldn’t cook anything. So this year, I learned, and I have fallen in love with it.  Morgan is vegetarian, so we’re doing a lot of bowls or pastas, or that kind of thing. We did dry January.  It’s hard to talk about a song called ‘Hole In The Bottle” and not drink.”

Kelsea said she’s managed to stay in touch with a lot of her artist friends, including Maren Morris: “We have this unspoken rule that we hang out at least once or twice a year. It’s always like this therapy session. It was nice to meet her baby, and we had some tacos and some margaritas.”

Kelsea did a version of her current hit “Hole In The Bottle” with 90s legend Shania Twain: “I can’t believe that’s real.  The story behind that is Shania is one of my heroes. I’ve gotten to know her over the years. At the beginning of quarantine, she reached out about doing something together. It wasn’t until I watched the music video to Hole In The Bottle that I realized I tipped my hat to her.  So I texted her, and showed her the video, so she said yes, which is insane!”