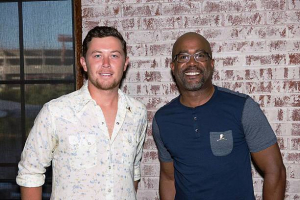 This week’s co-host is Darius Rucker, who is joined by Scotty McCreery, who fills in this week for Lon Helton.  Scotty begins by saying “I’m hanging out in the ‘real’ Carolina, North Carolina.” “Oh you mean the ‘other’ Carolina?” Scotty and Darius root for competing sports teams in their home states.

In fact, Scotty & Darius attended a football game a few years ago between the Gamecocks and the Wolfpack. Scotty remembered: “When we went to that USC-NC State game, we made a bet, whoever won would take the other to Pebble Beach.  I think I threw in a private jet too. Too much backstage whiskey.  I was very confident.  We’ll get to that someday, I promise.”

It turns out that Scotty has recently joined Darius’ fantasy football league. “I had a big win in his fantasy football league. I came in third, I got my money back. My first year in this new league that Darius put together. I started off going 0 and 3, It was not looking good. Then I played old D.” Darius said, “I am the mat of the league.  The name of his team was the Raleigh Rascals.  I crushed him every game.”

Scotty asked Darius about the recent story of him buying breakfast for some people at a restaurant: “I was on my way to play golf with my son. I stopped to eat, it was a Sunday morning, I saw all these families and kids, so as I walked out, I asked if I could pay everyone’s check. The cashier said ‘Sure,” so I paid the bill and tipped and left.  I was just trying to give those people a good morning.”

A few weeks ago, Darius invited Lady A to become the newest members of the Grand Ole Opry.  He told Scotty: “It was a special thing.  I wanted to do it for somebody, I’ve been a member for 4 years.  I got the call, asking if I wanted to be the guy. I knew what it would mean to them. It was a beautiful moment, I was so honored to be a part of it, it was one of the great moments of my career.”

Darius also talked about how his son Jack has been playing golf with Luke Bryan’s son Bo: “When I first came to Nashville, Luke was so great to me, it’s so great to have our kids play together, him & Bo are real good.” Scotty added, “I saw Jack on the driving range.  He is a baller on the golf course.” Darius added: “He hit one the other day 335 yards. He’s killin’ it.”