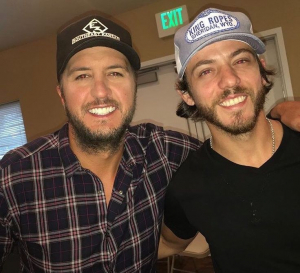 This week’s co-host is Luke Bryan, who has a Top 5 with Down To One. Lon’s got the weekend off and in his place is Chris Janson.  Chris & Luke are good friends.  In fact Luke invited Chris to Crash My Playa in 2019.  Luke tells Chris: “I’m glad to be talkin’ to you! It’s pretty challenging times with no tour, but I’m getting to watch a lot of basketball.”

Luke spent New Year’s Eve in the Caribbean, but he told Chris that he had a surprise guest: “Jason Aldean and his wife crashed my wife’s birthday.  Her birthday is New Year’s Eve, and we went to the Dominican Republic.  Jason calls me and goes, ‘Luke, can you find me a room?’ I called and got Jason a room. It was swankier room than I had.  But we got to spend some time with them, got to watch the Georgia Bulldogs, got to play some golf, and it was a great time hanging with Jason.”

Luke had just attended the Super Bowl in Tampa. “I was thankful to be part of the Big Concert for Small Business. We raised some money for some businesses in Nashville.  The game was crazy being there. Obviously it wasn’t a great game because the Chiefs got a taste of Brady. But the vibe was great, and any time you can be at a Super Bowl, it’s pretty fun.”

Luke had special interest watching Eric Church sing the National Anthem: “I did the anthem a couple years ago when the Patriots played the Falcons.  I was up in the crowd watching him, thinking about him, and after he was done, I knew he was relieved.  I texted him after the game, and said ‘Great job,’ and he goes, ‘Whew, stressful!'”

The new season of American Idol began last week.  Luke told Chris it’s going to be an exciting year: “I’m so thankful the contestants were able to audition in front of judges. No virtual auditions. The talent is great this year. We’ve got singers who’ve brought tears to my eyes. I’m glad that Idol looks like a normal season.”

Luke also talked about his fellow judges Katy Perry and Lionel Richie: “Obviously Katy is a new mother, and the resilience of how she can be up all night, and then come on the site and work 12 hours a day.  It’s just good to be back on the show with them. We hadn’t seen each other since last spring because of the pandemic.  We love being able to mentor these kids.”