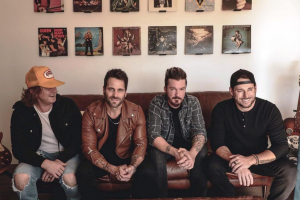 This week’s co-host is Matt Thomas, lead singer of the band Parmalee.  It’s actually his first time to co-host with Lon.  Matt said, “It’s been a wonderful journey to see the song connect and get us through the pandemic with a little light and positivity.”

We all know Just The Way as a duet with Blanco Brown.  But Matt told Lon he first offered the song to Kane Brown. “He was the only person I pitched the song to, because I thought it might be good for him when we weren’t sure if it was gonna be our song. I’m thankful he didn’t scoop it up.”

A few years ago, Parmalee did a tour with Jake Owen: “We had a blast on that tour.  We just hit it off. Jake lives out by us, and we hang out quite a bit. I’m so glad this song is moving up, because it’s great. Maybe we’ll get back out on the road with him.”

Parmalee is originally from Greenville NC.  Matt recalls playing a homecoming show in 2017, and Luke Combs opened for them.  “It was Luke Combs and Kane Brown at a pretty good deal! It was cool because they brought people in.  There were people coming to the show to see Luke play.  They are the real deal.”

With the success of Just The Way, you might be wondering about the status of their next album: “We’ve been in the studio working on new stuff.  I just wrote a song yesterday that I hope to get a female collaboration on.  We’re taking our time, making sure we write or find something great to come with next.”