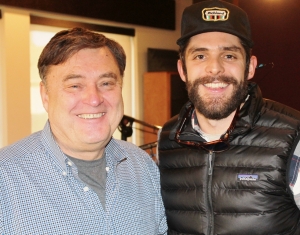 Thomas almost missed the ACM ceremony last September: “I was in the middle of a month long road trip with my family.  My manager suggested I come back, so I flew in to Nashville the day of the awards. When they called my name, I was so glad I flew back!  Then when I got back with my family, my wife wrote on the door: ‘Welcome home Entertainer of the Year.'”

Thomas told Lon he heard from a previous winner: Luke Bryan. “He was one of the first people who texted me, and that was a special text. I looked up to Luke since I was 18 years old.  I never forget watching Luke win Entertainer for the first time, and I knew it was coming. So hearing from Luke is more special than he can ever know.”

Thomas just celebrated the first birthday of his baby girl Lennon: “We just sit them in front of their birthday cake, and Lennon went face first in her cake. She was born right before the country shut down. We got to her turning one, and it was like ‘Good grief, how did time go that fast?'”

Last week, Thomas announced he will release a new album called “Country Again Side A” on April 30: “It’s gonna be a double album, not all coming out at the same time. One will come out in April, and the other in the fall.  We recorded so many songs. We ended up cutting about 23 songs in the studio, so I’m pumped to get them out to fans.”

Also on his schedule is a group of shows at Billy Bob’s Texas: “These will be my first shows since October of 2019. I’m nervous, but in a good way.  I’m glad we get to do something safe like that, and play music.”