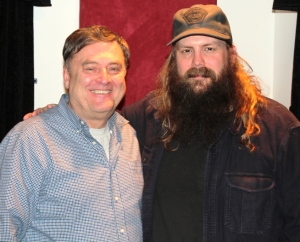 CCUSA host Lon Helton had a very detailed conversation with Chris Stapleton about his new album “Starting Over.”  They spoke about making the album, writing several of the songs, and why he chose to record cover songs by Guy Clark and John Fogerty.  Chris says he began work on the album in 2018, and put it aside after a power failure stopped the recording process.  However, all of the recording was complete by the time of the pandemic in March of 2020.  He says all that was left was naming the album and doing the album cover.  The simplicity of the album cover reflects the circumstances.  Chris explains the story behind the last song on the album: “Nashville TN.”  He said the song was written after his success in 2015, when a number of things changed for him.  Chris also chooses which of the songs he’s proudest of on the album.