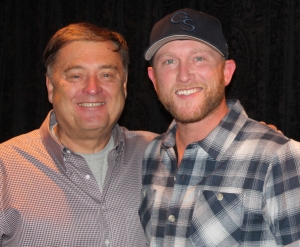 Lon’s co-host this week is Cole Swindell, who was at his mother’s home in Georgia. “I’ve been back and forth between Nashville and here, it’s been nice to be down where I’m from a little bit.  This is the first chance I’ve had to come home and see family and friends.  I’ve enjoyed getting reset.  It’s been a good year, as good as we can make out of it.”

A couple months ago, Cole played the LPGA Pro-Am with other country stars, including Lee Brice: “That’s one of my favorite events of the year.  I play every year with Lee Brice. Lee’s fun to play with, we have an absolute blast.”

Cole said he’s been writing and recording new music during his time off.  He told Lon about a possible duet in the works: “Something I’m excited about, there’s a song I wrote that’s gonna be a male-female duet.  I’m very excited about that.  That’s probably gonna be one of the biggest things about this next project.” 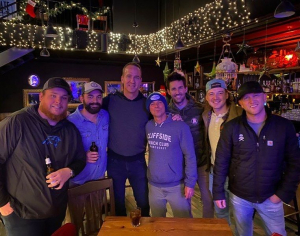 Also at the Peyton get-together was Jake Owen: “We hung out that night, and we’ve played some golf since then as well. I got to play in his charity tournament.  He recently sent me a text about how our songs are starting to pick up on radio.  Made For You is one of my favorite songs he’s done.  That’s why we love country music.”

Cole had hoped to spend 2020 on tour with Thomas Rhett, and he told Lon that may still happen in 2021: “We’re holding on to hope that it’ll happen before the end of the year.  Who knows, we’re waiting on them to turn us loose.  I hope I get to see him on the road this year.”