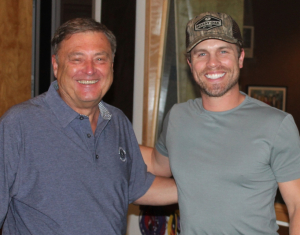 Lon’s co-host this week is Dustin Lynch.  He told Lon he had just begun his Stay Country Tour in 2020 when it was shut down. “We kinds got the rug pulled out from under us, all this momentum was building, and boom, the plug pulled, so I’m looking forward to picking up where we left off and continue to play those shows.”

Dustin says he’s spent most of the year at his Nashville home.  But a few weeks ago, he went to Key West: “We spent about a month in Florida. I hate Tennessee Februaries, they’re depressing, and Florida is the place we could pull it off.  There’s something about the Keys, I love to chase fish, lobster, and all that good stuff.”

Dustin picked up a new hobby during the last year.  He’s working on his pilot’s license: “It’s something I never dreamed of doing, but I love it, there’s nothing like getting up on the sky.  It’s brought me a new perspective on life.  With a plane, I can get anywhere pretty easily.  What’s driving this is my love of hunting and fishing.”

There was no Crash My Playa festival in 2021.  Dustin has played it 6 years in a row, and he told Lon about his pool party last year: “We had gotten word that Luke Bryan was going to shoot his One Margarita video at my pool party.  So we expected Luke any time, and we finally found out he had a few too many margaritas, and missed his own video shoot.”

Also at Luke’s festival in 2020 was Jason Aldean, and Dustin got to jam with Jason: “Me & Aldean two-man teamed a guitar.  I played the chords with my left hand, and Aldean was strumming with his right hand. That was a bucket list thing.  Aldean is one of the guys I look up to.”

Speaking of pool parties, Dustin will host his 1st annual “Pool Situation” at the Linq Hotel in Las Vegas on June 4: “We’ve been trying to figure out how to bring my pool party to the States, and what better place than Las Vegas.  Hopefully this is the first of many to come, and we hope to add more locations as we go along.  There’s gonna be a lot more going on that just a swimming pool. We’ve got some tricks up our sleeve.”