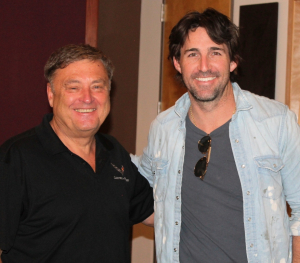 This week’s co-host is Jake Owen, who begins the show catching us up on his 2 year old daughter Paris. “It’s such a cool thing that I didn’t have the first time around with Pearl. For example, waking up in the morning, making her bottle, letting her sit on my lap and watch cartoons.  Not having to facetime my daughter every day has been the silver lining for sure.”

Lon asked Jake about the past year: “When it first started, I thought this was going to be weird. Being home, I decided to get in the best shape of my life.  Then when it looked like this was going to last longer, I was like, ‘Baby, we’re gonna get cheeseburgers.’  I’ve given zero care to how I look or feel. I just got off track.  But now, I’m back on it.”

Jake was one of the stars invited by Peyton Manning to a football watching party last December.  Other artists were Kenny Chesney, Luke Combs, and Cole Swindell. “It was a small group of people, but we usually don’t see each other when we’re home.  I brought my daughter Pearl, and she got a picture with ‘Uncle Kenny.’ Afterwards, I asked if she knew who he was, and she said, ‘No.’  He’ll enjoy that.”

Speaking of Pearl, you see her wake boarding in the video for “Made For You.”  Jake explains: “I’ve taught her to wake board by pulling her across the pond on my farm.  I’ve put a ramp in my pond for her so she can hit the ramp.  My friends ask if I jump, and I tell them my 8 year old does.  It’s like Disneyland out there.”

The subject of golf came up a few times in the show, especially when we came to Darius Rucker: “We played together a few weeks ago, and Darius brought his son, who is a good golfer, but he’s at an age where he’s smarter in his mind than dad is. So his son was caddying for Darius, and every time he hit a bad shot, you could hear his son saying, ‘Dad, see I told you.’ I just thought that was hilarious.”