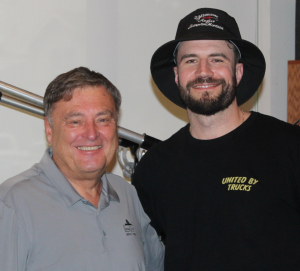 This week’s co-host is Sam Hunt. He tells Lon he’s spent the last year living in a 4 room cabin south of Nashville.  “I moved 20 minutes south of town, and lived in a little cabin. I’ve spent a lot of time up in the woods.  There’s something peaceful about living there.”

He went on to say it’s pretty rustic: “It’s a traditional cabin, like the way they built them a long time ago.  Two rooms on the first floor, and two rooms on the second floor.  My wife fell in love with it. We’re both minimalists at heart.  The logs are cut with axes, so it’s very traditional.”

Sam then told Lon he may have to change his living situation soon: “We may have to do something when we have a baby, because there’s not much room for anybody other than us.” Lon asked, Is that on the horizon? “Yeah, I’m talking about it, I’m ready to make a move in that direction. My wife is comin’ around. I think she’s ready too.”

Sam had this update on new music: “I recently did a retreat down in Florida in March to do some writing. We got a lot done, started recording some new music. My next single is most likely coming from this new batch of songs.  Now it’s just a matter of getting them recorded.”

Tenille Arts has her first #1 this week, so Lon & Sam called her with congratulations: “It’s been an exciting week for sure.  The week leading up to it, that was probably the most stressful week of my life. It was really down to the last minute, down to Sunday morning. When we finally got that phone call Sunday morning, oh my gosh, it was a relief and one of the most inspiring moments of my career. I’ve wanted to have a song on country radio my whole life, and have it go to #1, we all felt so excited, we’ve been celebrating all week.”