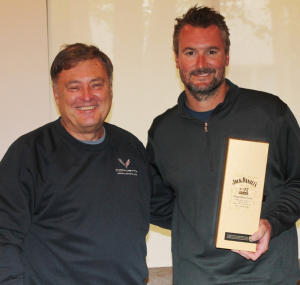 This week’s co-host is the CMA Entertainer of the Year Eric Church.  He was in our studio speaking with Lon on his birthday.  Lon brought him a present, as you can see in the picture.  As the show began, Lon wished Eric a happy birthday, but also asked why he chose to do this on his birthday: “I don’t wanna be with anyone else but Lon Helton on my 44th birthday. The older I get, the more laid back these things become.  Plus I just came off a 4-day golf trip for my birthday.”  More on that later.

Eric has just announced the Gather Again Tour, kicking off in the fall. He described it this way: “It’s a true middle-stage in the round, floor seats on every side, just one show per city.  We couldn’t do much more with Covid, because there’s a lot we don’t know. It’s been a nightmare just getting out in the fall.  We’re going to walk in and play, just us, with an intermission.”

He also just released 3 albums: Heart & Soul.  The 24 songs were recorded January 2020 in North Carolina.  Eric told Lon the process was intense: “I got to a manic kind of place. I was borderline unhealthy.  I didn’t sleep for days. I don’t think I could do it again. When it was over, it was like a re-entry to society.”

Eric told Lon he shared his new music early in the process with Keith Urban: “That was something we talked about at the time.  I think I sent him a few songs when I was in North Carolina, and he was in Australia, and we were each working on new projects.  It felt good to bounce it off Keith, and have him do the same with me.”

Lon asked Eric about performing the National Anthem at the Super Bowl: “When the NFL approached me they wanted a Caucasian country artist and an African American soul artist and they wanted to show unity. I thought being Entertainer of the Year and representing the format was important. But I underestimated the level of emotion I would have in that moment. I almost didn’t get through rehearsals.  You think about the people who serve this country.  For them, that is the Super Bowl. That was a powerful thing for me.”

Lon asked Eric about his 4-day golf trip: “We played Ohoopee in South Carolina and I was at Augusta National for three days. The greens were fast.  My best score was 85 the last day, which is pretty good for there. It’s tough.”  Lon asked, Were you there with anyone we know? “I was there with Luke Bryan and Peyton Manning.  We had a real good time. Hilarious.  We took our wives too.  Fun trip.”

A few weeks ago, when Rascal Flatts was Lon’s co-host, the guys talked about Eric.  Lon played that tape for Eric, and he responded: “There’s a lot of nuance to that.  I played longer than I should have, and I played louder than I should have.  There’s no hard feelings.  But it’s part of my story.  I maybe dispute whether we got fired or not.  I was vilified in the industry at the time.  I’ve always been me, and I’m me now.  It doesn’t bother me. It’s part of my story. They replaced me with Taylor Swift.  So it’s part of my story and part of her story too.  But it was about more than time. I’ll leave it there.”