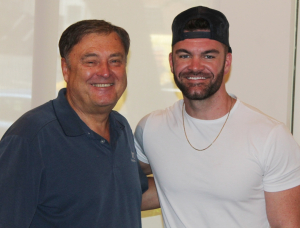 This week’s co-host is Dylan Scott, who told Lon he spent this past year with his wife and two kids, and is now looking forward to spending the summer and fall on tour with Luke Bryan: “It looks like everything is getting back to normal, but I took advantage of the time. I got to spend it with my wife and two kids.  Touring with Luke is a dream come true.”

In fact, Luke Bryan was in the building as Dylan spoke with Lon, so Dylan talked a lot about the tour: “It’s gonna be a fun time, just being our with Luke, and just getting to play music again this summer is going to be incredible.  He’s just a ball of energy.  I’m looking forward to watching him every night, he is the ACM Entertainer of the Year, so he’s doing something right.” 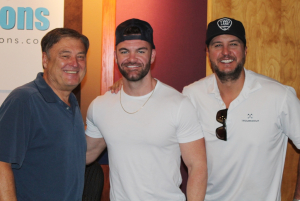 Dylan told Lon he’s known newcomer Lainey Wilson since they both were teenagers: “She grew up not far from where I grew up, and she’s a ball of fire.  We did a lot of shows together around Louisiana.  She’s super out-going, and I think that’s what a lot of people gravitate to.”

So what did Dylan learn about his kids during this past year? “They’re both full of energy, my son is 3 years old and my daughter is a year and a half.  We woke up every day and watched ‘Puppy Dog Pals’ and changed diapers.”

Dylan told Lon he started a new business during the pandemic: The residential trash business! “I’ve got a buddy back home in Louisiana who was talking about the trash situation.in his neighborhood.  He said he didn’t have trash collection.  So we started a trash business in his pickup truck.  In six months, we have a thousand houses and two trucks.  Trash & country music!”

Dylan also said he’s been working on some new music: “This last year gave me a lot of time to write. We were writing and recording a new project.  We just finished it up a couple weeks ago, so I’ve got a lot of music that I’m really excited about.  The next single will be something that nobody’s heard before.”