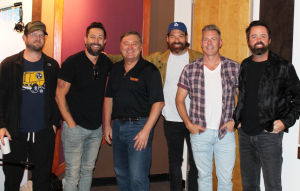 Lon’s co-hosts this week are all five members of the band Old Dominion.  Lead singer Matt Ramsey was there, still recovering from a broken rib and collapsed lung, caused by a fall from a ladder in his house.  Lon asked if he called 911? “Oh yes, called 911, I was there by myself, and the ambulance showed up.” Did the driver recognize you? “I don’t think so, but the nurse at the hospital did.  She was like, ‘We’re gonna take good care of you.’ ‘Could you just say happy birthday to my cousin?'”

The guys just saw Kenny Chesney a few weeks ago: “We just played a show in Key West. he surprised us, we had no idea he was coming. He jumped up and sang ‘Save It For a Rainy Day.’ It was our first show back.” Did you know he was there? “No, I texted him and said, ‘You should come to Key West,’ and he goes ‘Hahaha, you must be drunk already.’  And that evening, he walks out on stage.”

The band played at Luke Bryan’s Crash My Playa in 2020.  Matt recalled this moment: “This is the grossest thing that’s ever happened. We were on stage, Brad starts playing ‘Light It Up,’ because Brad wrote that song with Luke.  Luke comes on stage, and takes one of my in-ear monitors and puts in in his ear.   I was like, yuck, that has to go back in my ear!”

Speaking of Brad, he told Lon he just wrote a song with Keith Urban: “I wrote a song that was pitched to Keith, and he asked if he could make changes.  So I was on the golf course, and Keith texts me, ‘Can I call you?’ And I said sure.  So he calls in and asks how the game was going.  I had parred 6 holes in a row.  I was about to putt, and it comes up short, but the guys around me cheer and say ‘Thanks Keith!’  I hope he never hears this.”