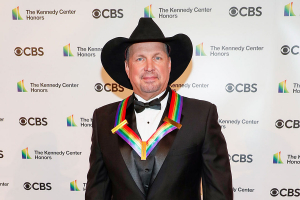 “This was pretty cool,” Garth admitted after the event, immediately directing attention to his fellow honorees. “Debbie Allen…has done everything from Fame to Grey’s Anatomy. Dick Van Dyke…if he would shave his beard looks exactly like Dick Van Dyke when I was a kid. Man, he was the life of the party. Joan Baez…has changed the world a thousand times over. She changed the world every day the way I hope I do in my lifetime once. You talk about courage, character and discipline – this is the definition right here. Midori…just fantastic. [She’s] a person you want to know.”

Though we’ll have to watch Sunday to see how each of these artists are saluted, Garth has revealed his tribute included an appearance by Bradley Cooper and a performance of “The River” by prior Kennedy Center Honors recipient James Taylor. The Kennedy Center and CBS have also an emotional Garth and Trisha Yearwood watching as Kelly Clarkson sings “The Dance.” Other performers at the event include Jimmie Allen and Gladys Knight.

“It’s a cool night,” Trisha shared a few days ago. “You can imagine with Debbie Allen…[a] great choreographer and dancer herself. And with Dick Van Dyke and all the musical numbers, you can imagine that there was a really great variety of performances,” she adds. “I’m looking forward to seeing it myself…we had a great time.”

This year’s event was staged over several days a couple of weeks ago (as planners adapted due to covid when making arrangements in advance), all of which will be compiled into Sunday night’s TV special. Those events found Garth, Trisha and the other honorees spending a lot of time together over the course of several days. “The thing that I really enjoyed the most was the chance to really spend time with the other honorees. This was very intimate, so each honoree got a chance to really visit,” Trisha indicates…something Garth echoed at the celebration.

“The difference between performing and being there…was the time they allowed the five honorees with each other,” he said. “You walk out of here going, ‘Damn!’ I could quite possibly be the weak link in this chain, and I am fine with that! These are some amazing…amazing…amazing performers. And to think that this is one of 43 years – that’s a pretty hellacious list to belong to.”