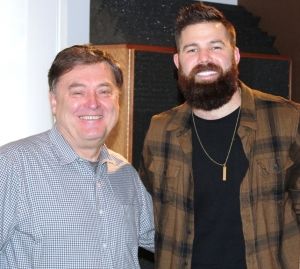 Lon’s co-host this week is Jordan Davis, who is in the Top 10 with Almost Maybes.  He and his wife Kristen are expecting a baby boy in September.  He told Lon, “Yeah September 2nd, going from a family of three to a family of four.  Man to man at the Davis household.  It’s gonna be a handful. If he’s anything like his sister, he’s gonna be a handful, because she is wide open.”

Jordan just played his first major festival since the lockdown over a year ago: “It was bizarre, it was exciting, it was nerve-wracking.  I haven’t felt those nerves in a long time.  After the first song, it was right back into it.” It was the Carolina Country Music Festival in Myrtle Beach SC.

Jordan will be joining Kane Brown on the Blessed & Free Tour next fall.  Kane’s daughter Kingsley is the same age as Jordan’s daughter Eloise.  So will the girls get to play together? “I know Kingsley will go out with them. But it depends on how well my wife is feeling after #2, because the baby will be born September 2, and we go out October 1st.  So hey little guy, this is your dad speaking, if you want to get here early, that’s fine by me!”

Jordan just released a new 8 song EP called Buy Dirt, and the title song is a duet with Luke Bryan: “He was on the radio when I was in college.  We’d listen to him in college. So here I am now in Nashville, and have a friendship with him. Music’s allowed me to do some amazing things.  Luke’s about as big as it gets.  That’s something I’ll always be able to look back at and think about how cool it was.”

Jordan spent the last few months on a Nashville amateur softball team organized by Jameson Rodgers: “We call him ‘coach.’  He put together this team, and it was so cool, and we just so happened to take home the championship.  It got more competitive than I thought. But we had a good little squad.”

Jordan had expected to tour last year with Sam Hunt. The tour was cancelled, but they became friends anyway.  “We went to a fundraiser that had a silent auction. There was a fishing trip to Argentina.  Sam & I bid on it, and we won! So we have this trip planned at some point. Hey Sam, we need to get on this and use it before it expires.”