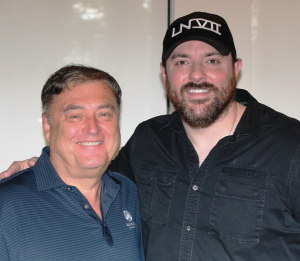 Lon’s co-host this week is Chris Young. He was fresh off two sold-out shows in California and a CMT Award win for “Famous Friends:”  “That was only the second time we got to perform it together, but we got to use pyro during the CMT Awards. It was awesome winning a CMT Award for this video because it was our real friends who starred in it.”

The two shows were his first full shows since the pandemic began last year.  He described the feeling to be back on stage: “It was really interesting because it was simultaneously feeling like I’ve never had a night this good in my life, and like riding a bike. There were only a couple times when I forgot the words.  But it was awesome being back out there again.”

It’s 4th of July weekend, and Lon asked Chris if he likes to blow stuff up: “For a long time, you could tell how well my career was going by how many fireworks me & my dad bought for 4th of July.  It started with sparklers, and went way up from there. To the point where people on our street stopped buying fireworks and just watched whatever we bought.”

Chris recently attended a show by Jimmie Allen at Billy Bob’s in Fort Worth. “I took Jimmie fishing with me.  But what led to that was a conversation with Dak Prescott of the Dallas Cowboys.  He & his brother invited me to go fishing, and I invited Jimmie to join us.  Then Jimmie invited us all to his show at Billy Bob’s.  It was the day after the CMT awards, and it was awesome.

In addition, Chris attended the Super Bowl in Tampa: “I took all of the people in my podcast down. There weren’t a lot of people there. There were small groups of people with cardboard cutouts in front and in back of them.  It was wild seeing a super bowl like that.  It was dramatically different.”

Chris will be releasing a new album on August 6th.  It’s been several years in the making.  “I was supposed to put it out a year ago, but we know what happened.  It wouldn’t have been the same album if I had put it out a year ago. There were several songs that didn’t exist a year ago.  The label wanted to have 14 songs, so we put out more music than we usually do.”

Sunday is the 4th of July, and Monday, Chris will be playing a free concert in downtown Nashville.  He told Lon, “We’re filming a music video and inviting everybody down to be the crowd for it.  As a thank you, I’ll be up there with my band, so we’re gonna play some songs.  We’re shooting “At The End of a Bar,” which is perfect for downtown Nashville.  Were inviting everybody to come down and just hang out.”