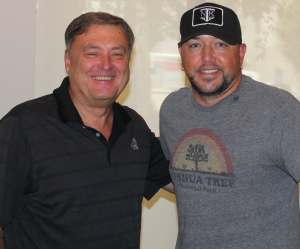 Last month, Jason took part in the Kennedy Center Honors, saluting Garth Brooks: Garth opened a lot of doors for artists like me, who aren’t traditional country artists.  I liked his music, but I watched him live in the early 90s, and I’d never seen a show like that.  It was a life-changing thing for me.”

A few weeks ago, Jason attended the high school graduation of his oldest daughter Keeley: “I’ve got one in college, and two who aren’t in kindergarten yet.  The difference between being a parent in your 20s and being a parent in your 40s is I get tired way quicker now. They nap? I nap.  I had a lot more energy at 25.”

Brantley Gilbert posted of photo of him and Jason in the studio, so Lon asked about that: “He hit me up and asked me if I want to be on this song, and I said yes.  So it’ll be on his album. I don’t know if I can say much about the song, but it has Rolex in the title.  Who could imagine two country boys singing about a Rolex, but it’s cool.”

Luke Bryan has announced that Jason will perform at next year’s Crash My Playa festival in Mexico: “I told him when I was there last year that I wanted to be there from now on.  So he named me ‘El Presidente of Crash My Playa,’ which means I need to be there to oversee everything.”

Jason & his wife spent New Year’s Eve in the Dominican Republic with Luke Bryan & his wife. Luke’s side of the story was “Jason & his wife crashed my wife’s birthday.  Her birthday is New Year’s Eve.  Jason calls me and asks ‘Luke, are there any available rooms?’ I helped get them a swanky room, and it was great hanging with Jason.”  Jason responded: “It was a swanky room, but I paid more than he did.  We stayed about 150 yards from where they were. We were looking for warmer weather, and they happened to be down there.  We went down, watched the Georgia bowl game down there, played some golf, but when Luke tells you he’s got you a hook up, you need to ask questions.  Luke Bryan and ‘swanky’ don’t go together at all.”