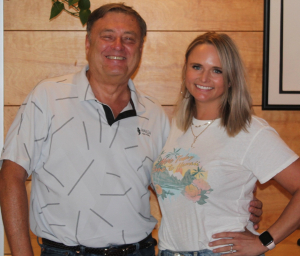 This week’s co-host is Miranda Lambert, who has recently released a lot of new music, and is now back on the road.  She also talks about life with her husband Brendan, who appears in her latest video.

Miranda is the newest country star with a bar in downtown Nashville. It’s called Casa Rosa Cantina, and as you can imagine, it’s Tex-Mex: “I had a hand in almost all of it.  I gathered a bunch of menus from my favorite places in Texas, and used them as a reference.  We were supposed to open in June 2020.  The blessing was we had more time to plan it out.”

Lon asked what’s Miranda’s favorite dish: “I like the gringo tacos, just straight up beef tacos with queso.” Favorite margarita? “My favorite is the Locomotive.  It had jalapeno infused tequila.  It’s delicious.” Did you personally approve all of the margaritas?  “I did taste them all.”

Lon observed she’s the first woman to have a celebrity bar in downtown Nashville: “I am, and I’m so honored by that, and I take it very seriously. I’ve seen the vision come to life, stopping in for a few hours here & there.  I see all the girls really enjoying it, and that’s what I wanted.”

Miranda told Lon that she’s very impressed with Lainey Wilson: “I started hearing her music and I reached out to her. When I heard the line in her song about ‘I can put  trailer on a 2 inch hitch, I can shoot a shotgun I can catch a fish,’ I said hold on, who is this?  I can do that too. This is awesome!”

Miranda said her next single will come from a new album: “I’m working on new stuff, and we’re almost there. It was a great blessing to write all this stuff and work on these project, although it was scary to be a musician and not have any shows.  But it did open space for me to be a songwriter and I really loved it.”  Her last album, Wildcard, was release in 2019.

Miranda revealed that she recently wrote a song with Luke Combs: “We wrote a great song.  More to come, Lon.  I can’t tell you any more.  I’ll tell you when I can.” When will that be? “You’ll know.”

Lon also asked about having her husband, Brendan McLoughlin, appear in her latest video: “That was the first time I ever had a love interest in one of my videos.  Because usually my videos are burning houses down. But we shot it at my farm, and that’s my husband.”  Who’s idea was it for him to be shirtless? “It might have been me, and he didn’t complain. When you look like that, you’re supposed to share, that’s why you have that gift.”  Did he enjoy it? “He did, he’s a natural entertainer.  He’s been really great about all of it.”