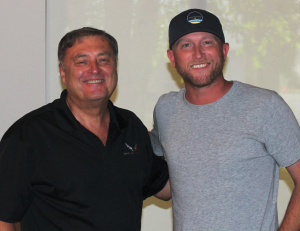 This week’s co-host is Cole Swindell, who told Lon he’s back on the road: “Just getting back doing shows, when a song is going up the charts, you can just tell it’s getting bigger.  You can tell by the fan’s reaction, by how powerful radio is. It’s been great to play it live now a few times.”

Cole is getting ready to join Thomas Rhett on the Center Point Road tour next month: “We had a festival in Wisconsin a few weeks ago that was a preview to what the tour is gonna be like. Got to hand out with him on the bus, kinda catch up, I know he’s got another newborn on the way, I can’t wait to be out there with him and his family.”

Cole told Lon he got to hang out with Kenny Chesney over 4th of July weekend: “We were hanging out at one of the Predators, Ryan Johansson, has a spot in town where he had a little 4th of July get-together at his pool.  Johansson’s first concert was a Kenny Chesney show. It was a fun day.”

In May, Dierks Bentley did a series of club shows, and Cole was a surprise guest at the last one: “I sent him a random text one morning, and he invited me to come, I sang ‘You Ain’t Worth The Whiskey’ with him and his band, so I was just happy we got to be there for that.”

With the time off, Cole told Lon he’s been working on new music: “I’ve written more songs in the last year and a half than the previous two. My next single will be something totally new off the next project, and that’s exciting. There’s a duet I’m really excited about, a male-female duet, and we’re close to getting that one done. Hopefully people will hear it soon.”