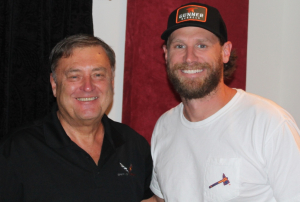 This week’s co-host is Chase Rice, who tells Lon what it’s like to have the biggest hit of his career: “‘Drinkin’ Beer, Talkin’ God’ is the first song where I’m like, ‘slow down,’ I’ve never had a song this fast! It’s been a fun ride because it’s with FGL.  I grew up with those guys, we shared a house together, and it’s been great to see them grow as artists, it’s the perfect song for us to do together.”

This weekend, Garth Brooks plays Nashville’s Nissan Stadium.  Chase was supposed to open the show: “He texted me and he goes, ‘Hey buddy it’s Garth, we just announced the Nissan show, can I call you?’ So he calls me, and we’re in Green Bay that day. He even invited me to sing ‘Friends In Low Places’ with him.  But you don’t want to cancel your own show.  We tried to move it, but we couldn’t make it happen. But he’s a cool guy for trying to make it happen.”

It would not have been the first time for Chase to open a Garth stadium show: “The last show we did before the pandemic was Detroit in Ford Field. So I have played with him.” 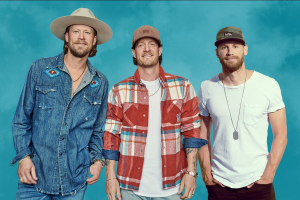 The year off from touring allowed Chase to spend more time at his farm outside Nashville. “That became home. It’s not just a place, I have memories.  I have a bison farm now, they’re roaming around now.  I didn’t want horses, because they’re too much work.  Cattle never intrigued me. I love the west, so I have 20 bison now.  Two weeks ago, we had our first baby born on the farm.”

This weekend, the Summer Olympics continue in Tokyo. Meanwhile, Chase is holding the Beer Olympics out at his farm: “Last year, we had four categories. We had team activities, it was just a group of people, some military friends, some hockey buddies, we all just came together, when you have nothing to do, there was nothing else going on.  I think we’re going to have four teams again with 20 people.  The prize will be the Yeti Cup.”