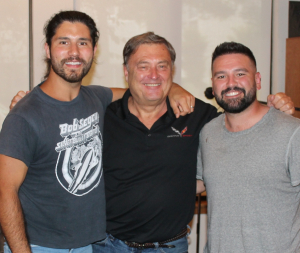 This week Lon’s co-hosts are Dan + Shay, who are about to begin a busy stretch. They release their new album “Good Things” next Friday.  They’re celebrating the release with a huge outdoor concert in Nashville.  Then they kick off their (Arena) Tour.  They talk about all that as well as their Top 5 hit “Glad You Exist.”

The album is their first in three years: “I feel like we really tapped in, we feel like we owe it to the fans and country radio to keep pushing, keep raising the bar, and we feel like we did that on this one.  We got it out as fast as humanly possible.”

The guys have already played a few festival shows this summer: “It was the first time in 458 days!  It felt good to be back out there for sure,  There’s nothing like the immediate gratification of being on stage, feeling the response from the fans.  Country music is alive & well.”

In fact, they never played their current hit Glad You Exist for an audience until last week: “With a new song, you wonder how they’ll react.  So we did it acoustically, at the end of the stage, and it was one of the most powerful sing-alongs we’ve had in our career.  Same with the previous single  It was really exciting.”

Next Friday, album release day, the guys will do an outdoor show in Nashville: “It’s in Centennial Park. This town is so important to us, and we get to host a huge party.  It will be a festival sized stage, they’ve never held a concert there before, we’re stoked.”