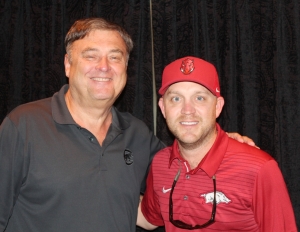 Lon’s co-host this week is Justin Moore, from his home in Arkansas.  In fact he told Lon, “I got off a tractor to hang out with you. I figured I’d come in, grab a glass of tea and hang out with you a while.”

Justin has been back on the road after 16 months at home. “We’d been hopin’ wishin’ and praying that we could get back out, and it looks like we should be. My wife is more than ready for me to leave. I told her, ‘I’m gonna be gone for 3 weeks,’ and she said ‘You’ve been home for 16 months, I can handle it.’  We’re about to be jam-packed, but what a huge blessing to be able to say that.”

Lon asked Justin about his first show back: “Riding a bike is a good way to put it.  We were beyond nervous, but we walked on stage, and 2-3 songs into the show, we realized we hadn’t made any mistakes, and it’s pretty wild how it just comes back to you. It’s pretty special.”

Lon followed up by asking ‘Any concerns about pulling on your stage jeans?’ Justin replied: “No doubt about it. They fit a little tighter.  I tried to do good for a while. I’m still trying to get back in shape.  I had a few more chicken-fried steaks than I did in the past.”

One of the new projects Justin took on during the pandemic was his podcast.  Among his guests were Carly Pearce, Jon Pardi, Jameson Rodgers, and actor Matthew McConaughey.  Justin said, “Matthew is a Texas guy, and as an Arkansas fan I went in fully intending to giving him crap for being a Longhorns fan, but he was such a nice guy, I couldn’t even go there.”

Lon dug a little deeper on the college football issue: “We’re trying to connect for a Texas-Arkansas game. We’re supposed to play them the second week this year, so we discussed a friendly wager. The game is here, and I told him I can hook him up with tickets.   I’m sure he has his own connections for tickets as well.  But we may have a good story if it’s a good game.”