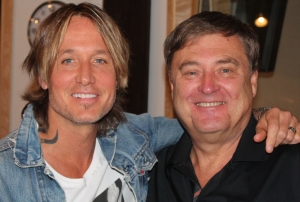 Lon’s co-host this week is Keith Urban, who joined him from Australia: “You literally just caught me, my wife’s wrapping up her film here, so we’re coming back to Nashville in about 5 days. We’ve been here for a very short film project that Nic was shooting here for Apple TV.”

Keith & family have been traveling back & forth this past year: “Another project that Nic was doing was ‘Nine Perfect Strangers,‘ that’s coming out on Amazon very soon. It’s an 8-part TV series that took months to shoot.  We couldn’t in the US because of the restrictions, but we could do it in Australia. So they relocated the entire project to Australia.  It was monumental, but it got done.”

While in Australia, Keith was able to do the Australian version of The Voice: “I got a call asking, ‘Are you gonna be here a while? We’re gonna film The Voice here, but we’re doing it all in studio and no live shows.  Do you want to sign on?’  I said, ‘I’ll totally take the gig.’ It was fun to get back in the chair again.”

Keith’s current hit “One Too Many” features Pink: “I sent her a gift to thank her for doing the song with me.  She also filmed footage that I can use on the tour, so we can duet every night on tour.  I sent her a Steinway piano, an upright Steinway piano.”

In addition to his current Top 10, Keith introduces his new single “Wild Hearts.”  He told Lon, “The song is about pursuing your dreams and goals, despite all the obstacles and challenges.  My musical journey began when I was 5 years old, when my dad took us to see Johnny Cash.”

Keith will take part in the ACM Party For a Cause next Tuesday.  He says it will be his first show since February of 2020. “The last show we did was Las Vegas, then everything shut down. We thought it would be short, but 18 months later, here we are.  I’m like a horse in the starting gate.  So ready to get out.”