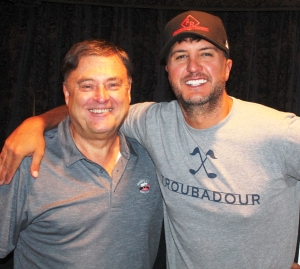 Lon’s co-host this week is the ACM Entertainer of the Year Luke Bryan.  He talks about his Proud To Be Right Here Tour, and a look ahead to Season 20 of American Idol. “The producers are out weeding through the talent, and we’ll do auditions in late September, and then we start filming through October, November, and December.”

Lon attended Luke’s Nashville show last month and asked Luke about his special guests: “I always hate putting my buddies on the spot.  But I called Jason Aldean and asked him where he was going to be Friday.  He told me he was going to be downtown shooting the video for his song with Carrie Underwood. So he was able to do it.  Then I get a text from Tyler Hubbard saying he was coming to the show.  So I asked him.  Then my manager told me Morgan Wallen might come to the show.  So when all of us were on stage, I’ve never heard fans yell that loud for three artists.  That may have been the most fun I’ve ever had at a concert.”

Luke continued, “That was the best show I’ve ever been a part of. It was fun, it was artists loving fans and fans loving artists in the heart of Nashville.  It was special. We all got in the dressing room afterwards, and we were jumping around like a bunch of kids.  That’s why we fall in love with this stuff.  It’s really a blessing.”

Joining Luke all year on tour is Dylan Scott.  Apparently, Luke and Dylan share an interest in businesses outside of music: “I heard that Dylan had started a trash service in Louisiana.  In my hometown, I’ve got some businesses there, including a trash business.  So I put Dylan in touch with my guy in Georgia.  He’s got all the street smarts, and it was funny that we can talk trash.”

With all the time Luke has been spending in LA for American Idol, Lon was curious if Luke actually has a house there:  “I didn’t go the route of the house yet. I stay in a hotel. I have the same hotel room, we fly in and they hand me my key, and I get in bed.  I’m not in LA enough to justify having a condo.  In a normal year, I go out for three days and come home.”

When Dierks Bentley was Lon’s co-host, he talked about playing golf at Augusta National with Luke, Eric Church, and Peyton Manning.  Luke confirmed he was part of that group: “Dierks is right.  It turned into us sitting around playing music all night.  We went well into the night.  At breakfast the next day, some of the members said, ‘Yeah we heard y’all last night.’  So we’re not getting invited back.”