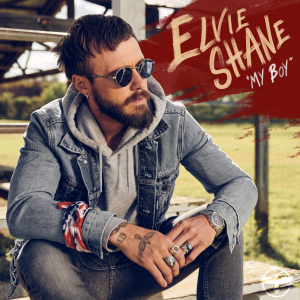 We have an artist with his very first Top 10 this week.  His name is Elvie Shane, and the song is “My Boy.”  We got a chance to speak with Elvie recently and ask him how having a hit song has changed his life:

Elvie: I’m living the dream, refusing to wake up.  It has been a pretty incredible last 4-5 months.  It feels like it takes forever while you’re doing it, and then when we got here and looked back, and it’s like dang, that went by fast.

Where does having a Top 10 song fit in? My dad had a saying that I’m busier than a one-armed paper-hanger in a wind storm. It beats the alternative. It’s what I’ve been working towards.  There’s so much to do. The minute you make it somewhere, that’s when the work is starting to begin.  The cool thing is it’s all enjoyable.

I understand that My Boy is not a new song? It’s been five years.  I’d been coming to town since August of 2015.  A group of us had a house in Hendersonville and each rented rooms.  So we were all together in a room, and we talked about a Facebook post that a friend of mine sent me, that said ‘I don’t have a stepson, I have a son who was born before I met him.’ That resonated with me, and we decided to write that idea.  Six hours later, we had “My Boy.” We all agreed, it was a God song, it would do something powerful, and it has, it’s been amazing to see the response to this song.

You have several videos for the song, but there are also a bunch of fan-created videos:  We do the “My Boy Mondays” on my socials where we highlight other peoples’ stories.  We have over 70,000 videos made using the song. I’m beyond blessed.  What it did was, through these videos, it’s allowed people to say “I love you” in a way they couldn’t otherwise.  I wrote it as a step-parent, but then you have foster families, adoptive families, surrogate parents, and I’m thankful I’m the vessel that delivers this.

You’ve also recorded a version for people who have daughters: We knew early on that if people responded the way we hoped, but had girls. So I threw together a girl version. When the song came out, people asked for a girl version. So we went in the studio and recorded that version too. Now people want me to do a step-mom version, and I only know my story.  Hopefully someday a female artist will do a song from her point of view.