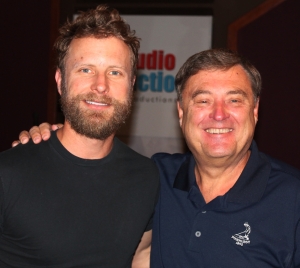 Lon’s co-host this week is Dierks Bentley.  Dierks was back in Nashville after spending most of the last year in Colorado. He said, “When the pandemic hit, I was in Colorado, so I just stayed put, and put our kids in school out there.  I spent a lot of time with my kids. I’m ready to get back out on the road, but made up for lost time with my family.”

While in Colorado, Dierks entertained some country stars, including Thomas Rhett & family: “They came out, and TR played me some new songs that he was working on, and I’m really proud of him, he’s a hard worker, and now they’re gonna have four kids.  It’s crazy!”

Dierks said he will once again bring his kids on the road with him this year: “What’s great about having kids on the road is seeing it through their eyes.  That makes it more fun for me. When they come out, there’s more to do, more fun, and I can’t wait for it to begin.” 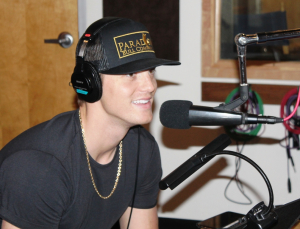 Dierks Bentley’s Beers On Me Tour will kick off in August.  Joining him will be Riley Green and Parker McCollum.  As it turned out, Parker was in the building, so we pulled him in the room with Dierks & Lon, and Parker said, “I’m getting paid to learn how a tour operates.  I will steal everything I can.  But the tour is called ‘Beers On Me’ tour, we’ll be lucky if we still have our four limbs by the time we get back to Nashville.”

We had heard that Dierks was causing some trouble at this year’s ACM Awards, so Lon asked him about it: “It was the most bizarre awards show I’d ever been a part of. I was in the Opry House, just me and the Male Vocalist nominees.  So when they announced Thomas Rhett, I said ‘Sucks.’  Then Eric Church. ‘Over-rated.’ When I realized no one could hear me, it was game on.  I’m there for comic relief. That’s why I get nominated.”

This Sunday is Father’s Day, so what is Dierks hoping for? “What I really want is peace & quiet, have a cup of coffee in the morning without some sort of crazy fight breaking out, or the dog peeing on the couch. But the kids get excited about it, so whatever makes them happy will be great.”

Lon’s co-host this week is Luke Combs.  He has an unusual situation with two songs in the Top 30 this week: His own top 5 hit, “Farewell After All,” plus his duet with Jameson Rodgers. For the duet, Luke says his wife Nicole first introduced him to Jameson’s music.  “I think we were in Lake Tahoe, me &…… END_OF_DOCUMENT_TOKEN_TO_BE_REPLACED

The 2020 Kennedy Center Honors – an annual celebration of the arts – airs this Sunday (8:00pm ET/7:00pm CT on CBS) with Garth Brooks among those being saluted…alongside actress-dancer-choreographer Debbie Allen, singer-songwriter-activist Joan Baez, violinist Midori and beloved TV and film star Dick Van Dyke. “This was pretty cool,” Garth admitted after the event, immediately directing attention to his fellow honorees. “Debbie Allen…has done everything from Fame to Grey’s…… END_OF_DOCUMENT_TOKEN_TO_BE_REPLACED

This week’s co-host is Tim McGraw, who tells Lon what he’s been doing this past year: “I’ve played guitar more than usual.  Probably writing more than usual because I have time.  I sort of stick with things I do well, so I’m a big movie fan and a big book fan.  I like watching old…… END_OF_DOCUMENT_TOKEN_TO_BE_REPLACED

Memorial Day was originally known as Decoration Day, and it goes back to the Civil War. The idea was to take a day and place flowers or a flag on the graves of soldiers. There are a lot of country songs that have a patriotic theme to them. Our Top 10 list focuses on country…… END_OF_DOCUMENT_TOKEN_TO_BE_REPLACED

Lon’s co-hosts this week are all five members of the band Old Dominion.  Lead singer Matt Ramsey was there, still recovering from a broken rib and collapsed lung, caused by a fall from a ladder in his house.  Lon asked if he called 911? “Oh yes, called 911, I was there by myself, and the ambulance showed up.” Did the…… END_OF_DOCUMENT_TOKEN_TO_BE_REPLACED

This week’s co-host is Dylan Scott, who told Lon he spent this past year with his wife and two kids, and is now looking forward to spending the summer and fall on tour with Luke Bryan: “It looks like everything is getting back to normal, but I took advantage of the time. I got to spend it…… END_OF_DOCUMENT_TOKEN_TO_BE_REPLACED

This week’s co-host is the CMA Entertainer of the Year Eric Church.  He was in our studio speaking with Lon on his birthday.  Lon brought him a present, as you can see in the picture.  As the show began, Lon wished Eric a happy birthday, but also asked why he chose to do this on his birthday:…… END_OF_DOCUMENT_TOKEN_TO_BE_REPLACED

This week, Tenille Arts celebrated her first #1 song with “Somebody Like That.”  As is our custom, Lon & his co-host Sam Hunt called Tenille to congratulate her on her success.  During the conversation, they talked about all the milestones this song achieved, as a song written, produced, and sung by women.  Her song also…… END_OF_DOCUMENT_TOKEN_TO_BE_REPLACED

This week’s co-host is Sam Hunt. He tells Lon he’s spent the last year living in a 4 room cabin south of Nashville.  “I moved 20 minutes south of town, and lived in a little cabin. I’ve spent a lot of time up in the woods.  There’s something peaceful about living there.” He went on to say…… END_OF_DOCUMENT_TOKEN_TO_BE_REPLACED